Here are 5 top reasons why you should avoid tanning beds at ALL costs:
1. Your risk of melanoma increases by 75 percent when you use tanning beds before the age of 35.
2. Last year, the International Agency for Research on Cancer shifted indoor tanning devices to the highest cancer risk  category: “carcinogenic to humans.” (They were formerly classified as “probably carcinogenic to humans.”)
3. Tanning can be addictive. For some people, UV radiation can have a drug like effect; they feel dependent on it and can experience withdrawal symptoms, says David Fisher, M.D., Ph.D.
4. Not only are tanning-bed users more vulnerable to melanoma, they’re also 2½ times more likely to be diagnosed with squamous cell carcinoma and 1½ times more susceptible to basal cell carcinoma.
5. If you want to stop or prevent premature aging, steer clear of tanning beds. Tanning beds cause noticeably aging skin, such as wrinkles, fine lines and age spots. Tanning can also create a “Leathery look to the skin which can add years to a person’s appearance.
A Tan may look Good but is it Good for you? More Dangers of Indoor Tanning.
Indoor tanning exposes users to two types of ultraviolet (UV) rays, UV-A and UV-B, which damage the skin and can lead to cancer. Indoor tanning is particularly dangerous for younger users; people who begin indoor tanning during adolescence or early adulthood have a higher risk of getting melanoma, likely because of increased lifetime UV exposure. In fact, every time you tan you increase your risk of getting melanoma.
Sunburns and tans are both dangerous because they cause DNA damage to our skin. Your risk of developing melanoma increases after just one blistering sunburn.
Squamous cell cancer increases based on your lifetime exposure to UV rays. Basal cell carcinoma risk increases based on the combination of intense sun exposure and lifetime exposure to UV radiation. UV radiation comes from the sun…and from tanning beds.
You cannot get a “Safe Tan” from a Tanning Bed.
The FDA and the CDC both suggest that you avoid using tanning beds in order to prevent developing skin cancer. There really is no such thing as a safe tan from a tanning bed. In addition to the risk of developing skin cancer, exposure to UV rays causes your skin to age prematurely.
It’s time we rethink our position on the standards of beauty. A Tan really is not beautiful; it is a walking advertisement for skin cancer.
This might ring a bell: “You only get the healthy rays in tanning beds,” or “Tanning beds give you a ‘base tan’ to keep you from burning.” The tanning-salon industry wooed many of us with these marketing claims when UVA rays — the ones tanning machines mainly use — were thought to be safe and only UVB rays from the sun were believed to be harmful.
Since then, we’ve grown wiser. Definitive research has now proven that both UVA and UVB rays can cause skin cancer. (UVA rays have been specifically linked to melanoma.) Still, about 30 million people go tanning every year, about 70 percent of whom are young women. Tanning salons outnumber even Starbucks and McDonalds in some of the largest U.S. cities, according to a San Diego State University study.
Still don’t want to kick the habit? Here’s why you must kiss the bed good-bye!
Help educate our youth about the Dangers of Tanning Beds!
Tanning Beds and Teens.  Tanning beds are not safe. Both UVA and UVB rays cause cancer. Tanning beds often exceed “safe” UV limits, despite the claims of the salon. Teens are at special risk because their bodies are undergoing such accelerated growth rates that their cells are more prone to the damage of the UV radiation. By routinely tanning their skin starting at a young age, teens put themselves at greater lifetime risk of developing skin cancer. Contrary to popular belief, it is possible to get sunburn in a tanning bed, and your eyes are at an increased risk of developing cataracts and corneal burns.
UV Radiation
UV radiation comes from the sun and from tanning beds. UV radiation damages our skin and adversely affects our immune system. As previously mentioned, one blistering sunburn increases your risk of developing melanoma, which is a very dangerous and lethal skin cancer. You are also 2.5 times more likely to develop basal cell carcinoma and 1.5 times more likely to develop squamous cell.
Statistics
In the United States, indoor tanning is thought to cause about 419,000 cases of skin cancer every year. For comparison, smoking is thought to cause about 226,000 cases of lung cancer every year.
According to the 2011 Youth Risk Behavior Surveillance System, the following proportions of youth report indoor tanning—
• 13% of all high school students.
• 21% of high school girls.
• 32% of girls in the 12th grade.
• 29% of white high school girls.
According to the 2010 National Health Interview Survey, indoor tanners tended to be young, non-Hispanic white women.
• 32% of non-Hispanic white women aged 18–21 years reported indoor tanning. Those who reported indoor tanning device use reported an average of 28 sessions in the past year.
• Among non-Hispanic white adults who used an indoor tanning device in the past year, 58% of women and 40% of men used one 10 times or more in the past year.
• Non-Hispanic white women between the ages of 18 and 21 years residing in the Midwest (44%) and non-Hispanic white women between the ages of 22 and 25 old in the South (36%) were most likely to use indoor tanning devices. 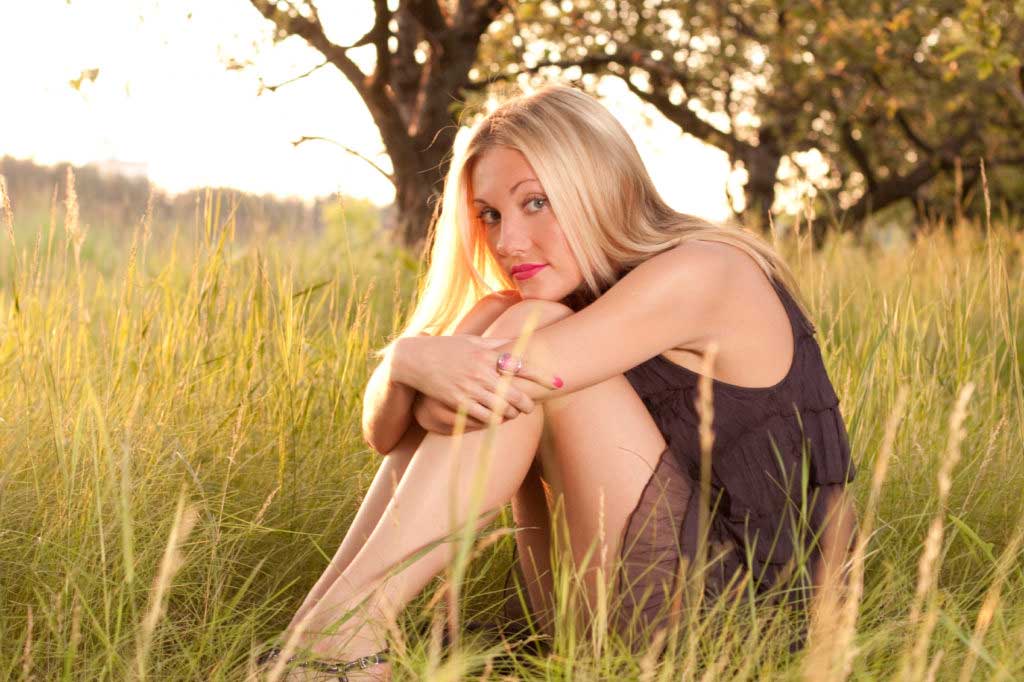 The arrival of summer weather can bring mixed emotions for many people. Coupled with the excitement of getting outside and enjoying the beautiful summer days is the dread of wearing shorts and knowing that everyone will see their purplish, branching spider veins. Around half of the population deals with spider veins and faces this problem every summer.  What can you do about it if you suffer from them? Belladerm offers excellent options to remove the unsightly veins.
1. Sclerotherapy is still considered the treatment of choice for the removal of superficial leg veins, many vessels may be too small to inject or patients may have an aversion to this invasive procedure. So what is it, anyway? Large areas of veins can be treated with hair-thin needles that inject a solution which irritates the lining of the vessel.  The irritation causes the vessel to swell and stick together, as well as making the blood clot.  In a matter of weeks, the vessel turns into scar tissue that eventually fades and becomes barely noticeable. Following the procedure, you will need to wear compression stockings for a short period of time but it will be well worth it.
2. IPL treatments are another option for these pesky veins. Intense Pulsed Light treatments use heat energy to selectively damage or destroy abnormal veins. As a result, the veins shrink and disappear.An advantage of these treatments is that no needles or sclerosing solutions are required.
You may have heard some myths about spider veins in general. Let’s clear up some of the facts here.

Don’t hide your legs this summer and suffer wearing long pants in the heat. You really can feel good about your legs again! Spider vein therapy is available at Belladerm with the best ways to remove the unsightly branching leg veins.

Three Non-surgical Ways to Rejuvenate Your Face this Summer

You may have heard it before, 40 is the new 30 and 50 is the new 40. This is much more that a new frame of mind, its about your visual age verses your chronological age. You do not have to look your age anymore – with safe and effective nonsurgical cosmetic procedures you can look years younger. And you can do it with little to no down with these three non-surgical ways to rejuvenate your face this summer.

HydraFacial offers a variety of serums to specifically target your skin issues, including:

This is a revolutionary skin treatment that gently clears away imperfections and improves the look and feel of your skin. HydraFacial is an advanced non-invasive, non-surgical procedure that quickly and easily delivers results without the use of lasers or harsh chemicals. It combines cleansing, exfoliation, extraction, hydration and antioxidant protection simultaneously, resulting in clearer, more beautiful skin with no discomfort or downtime. HydraFacial targets fine lines and wrinkles, congested and enlarged pores, oily or acne-prone skin, hyper pigmentation and brown spots.

People are taking better care of themselves and they are living much longer than they did decades ago.  During the twentieth century, life expectancy rose dramatically amongst the world’s wealthiest populations from around 50 to over 75 years. Since people are living much longer nowadays they deserve to look as good as they feel.
To find out more about non-surgical ways to rejuvenate your face this summer, call us to schedule a complimentary consultation at 763-494-9905.
We can customize a non-surgical beauty treatment that is right for you. The timing couldn’t be better to check out some of these options. Take a look at our Beauty in the Box offer: 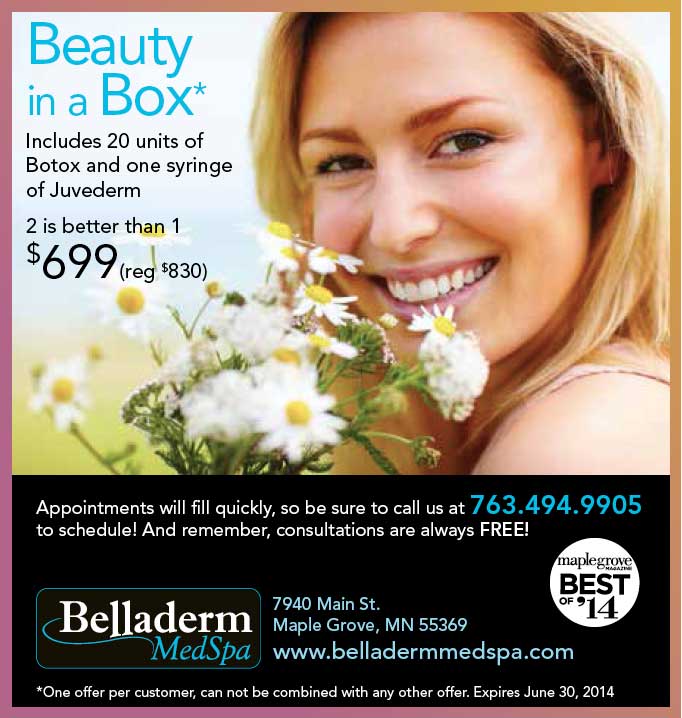 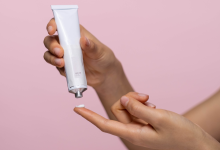